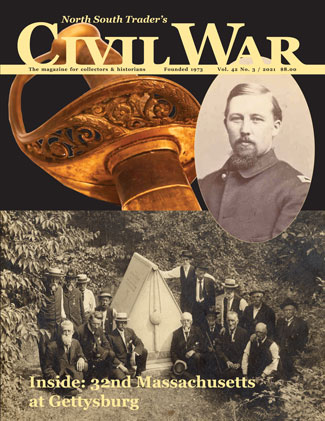 The magazine, initially known as North South Trader, was founded in 1973 by William S. Mussenden and has since employed scores of accomplished writers, typesetters, photographers, graphic artists, editors, and salespeople. The magazine has also employed numerous young people in internship capacities, many of whom remain in touch with us all these years later ~ a hallmark of the loyalty we celebrate in people North and South, no matter their choices in 1861-'65.

Publisher Sylvia
Steve Sylvia, publisher of what is now known as North South Trader's Civil War ~ or NSTCW for short ~ is the only remaining member of the original staff of 1973. Originally the magazine's editor, he purchased the publication from the founder in 1985 and has steered the literary ship ever since.

A native of Maryland and a graduate of the University of Maryland, he set roots down in central Virginia many decades ago. He is a lifelong collector of militaria and is also owner of J.S. Mosby Antiques & Artifacts at 125 East Main St. in historic Orange, Virginia. The shop, which carries fine antiques and collectibles in addition to authentic militaria, is open 10-5 Thursday-Saturday and by appointment. Collectors can also shop online at JSMosby.com.
In concert with Michael J. O'Donnell, he co-authored the well-received The Illustrated History of American Civil War Relics and Civil War Canteens, both of which have seen numerous printings. He also served as the first curator of the Gordonsville Exchange Hotel Museum in Gordonsville, Virginia, and has contributed countless articles about military artifacts to various publications.
His primary interest is Civil War history, but he also has an abiding interest in more recent wars. He is a collector of World War I and II artifacts as well, and co-authored Uniforms, Weapons & Equipment of the World War II G.I., which not only saw American distribution but was also later co-editioned with Arms & Armor Press in England and saw widespread international distribution. He also authored The Guns of Grenada ~ perhaps the only work to give the militaria of that short but decisive conflict its due.
His Civil War ancestors include a Vermonter who marched off to war for the Union and simply never came home. His fate remains unknown and his remains have never been found.
Editor/designer Rossbacher

Nancy Dearing Rossbacher, the magazine's managing editor and designer, has been with the magazine since the mid-1980s. She was raised on a naval defense installation in Virginia, where her father was involved in interior ballistics, and then lived two blocks from shot-heard-'round-the-world Lexington Green in Massachusetts. She studied at Westhampton College in Richmond, former capital of the Confederacy, and then lived in a house in Fredericksburg, Virginia, that can be seen in Civil War-period images. As a result, the gunfire, real and potential, from three wars ~ Revolutionary, Civil, and Cold ~ never seemed distant.
The daughter of two people who shared an interest in genealogy ~ her father authored Now Remembered: Living Pennsylvania History through 1900 (University Press of America, 1987) ~ she is also a longtime genealogist. Her research firm, Research by Rossbacher, specializes in reconnecting identified military artifacts with their onetime owners' histories; visit NDearing.com for more information. She is a member of the Daughters of the American Revolution and the Society of Mayflower Descendants. One Mayflower ancestor fell off the boat (and was rescued, thank goodness) and another, Edward Doty, caused no end of trouble in the New World; she suspects that DNA plays a stronger role in personality than studies have previously indicated.

Her Civil War ancestors include Wolverines who rode in the Michigan cavalry under Custer, one of whom survived Gettysburg only to perish at Falling Waters, as well as a soldier in Pennsylvania's Rush's Lancers and an Illinois quartermaster.
Her eclectic collecting interests include Imperial German Pickelhauben, midcentury modern kitsch, Bakelite and other early plastics, and Victorian and vintage jewelry. Her research work was featured in several front-cover stories for Vintage Fashion & Costume Jewelry, and she has served as editor, designer, contributor, consultant, and researcher for numerous books in the collectibles arena.

Native "Southern" West Virginian Bob Painter handles circulation, inventory, and shipping for the magazines, books, and antiques. Bob comes from a long line of coal mining ancestors, some of whom served in the Confederate army's 22nd Virginia Infantry and Thurmond's Rangers.

A metal detectorist since 1972, he moved to Orange County, Virginia, in 1978, and found that the Civil War was not only in his ancestral blood but in the earth surrounding his new home. "RelicBob,” as he is known to many in the field, has since spent countless hours unearthing artifacts of our nation's past in Virginia and numerous other states.

He shares his finds and his knowledge in articles in North South Trader's Civil War and in YouTube videos that feature the "Dug Out” Team (search YouTube for "Relic Bob”).

Bob's former career of more than 30 years focused on mine safety and health with the Mine Safety and Health Administration. A great portion of that career was spent as a professional investigator of mining disasters across the country. He retired in 2001 and can be found spending time with Terry, his wife of 40 years, his adult children, and his grandkids --- that is, if he is not off digging somewhere.

Over the years, our board of editorial consultants and article contributors have hailed from all 50 states and from Canada, Europe, Australia, and South America. The names of many are instantly recognizable to students of the Civil War, and all have added materially to the historical record.